I’d like to share with you a very interesting study released by the State Street Center for Applied Research. The report is titled “The Folklore of Finance - How beliefs and Behaviours Sabotage Success in the investment management industry”. 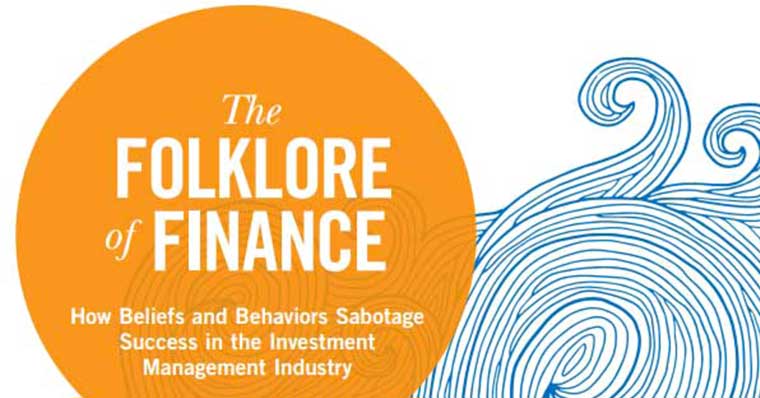 Over the past year or two here at Sable International we’ve also become increasingly sceptical of the value add offered by the traditional stock picker fund manager. This is especially true in large developed markets. We’re not sold on the pure passive tracker model either but that’s a story for another day.

The Folklore of Finance's survey findings

The survey in question interviewed 3,744 investors, investment providers, retail investors, fund managers, regulators and government officials across 19 countries. The findings support many other academic papers that have questioned the so-called "outperformance" on offer from top fund managers. The report finds that pursuit of success by fund managers and retail investors alike results in certain shared beliefs that govern behaviours. We’ll call these beliefs the Folklores of Finance. These false beliefs result in the industry spending 60% of its capital expenditure chasing an alpha performance that industry professionals themselves admit is more likely to result from luck than skill.

However, the allure of "alpha" remains strong. To remind ourselves, alpha is an outperformance over a defined benchmark over time. Before we address the opaqueness of benchmark selection (which is a topic in and of itself!), let’s remember the well-known truism of behavioural finance - absolute personal wealth is far less important than relative personal wealth. Your neighbour or colleague's financial good fortune has a far bigger effect on your perception of your own wellbeing than your absolute wealth. Our irrationality as humans requires that we always be better than average. Average or below is an unacceptably uncomfortable place to find oneself in this era of the super individual.

The industry’s devotion to alpha is reminiscent of the research of professor Taffler and Tuckett, who defined “Phantastic” objects: “attractive objects that stimulate high excitement and almost automatic idealisation and so, a powerful wish to possess.”

And so it is that the industry propagates numerous false beliefs in the attempt to convince themselves and their investors that it is possible to be on the right side of a zero sum game all of the time. So why is it so hard for a fund manager to "outperform"? The report cites a few quite obvious reasons:

Interestingly, the fund manager industry itself seems aware of this issue. Only 42% of fund managers believe alpha performance is primarily down to skill but 53% of individual investors believe the same!

"The brain is terribly adept at substituting emotions for facts in order to make a financial decision that feels right." - Cabot Research

The report does a good job of highlighting what we believe to be the primary issue around investment - the meeting of long term goals. That process is what we would call financial planning. Investment management is only one aspect of the financial planning picture and meeting long term goals requires the management of many moving parts including the pursuit of alpha within investment portfolios. It’s clear from the quoted survey that focusing on alpha is counter-productive and should never overshadow the meeting of long term financial goals for the client. If there’s a message from today’s letter it is exactly that - find an adviser to work with and work on the long-term goals.

For more information on the topics covered in this post, or for any other wealth-related queries, you can contactus on+44 (0) 20 7759 7519or emailour wealth team.