UK naturalisation:
Obtain British citizenship through residence in the UK

Naturalisation is the process of becoming a British citizen through a period of qualifying residency in the UK. The criteria will depend on your individual circumstances. Whatever your situation is, our expert UK immigration and citizenship experts can guide you through the complex processes of applying for British citizenship.

More in this section

The basics: How to become a naturalised citizen of the UK

To be granted British citizenship, you will have to meet several eligibility and residential requirements.

To be eligible for naturalisation in the UK you must:

You will also have to satisfy residential requirements.

The key requirements are as follows:

It should be noted that the vast majority of refusals of British citizenship applications have been as a result of applicants not meeting the good character and residential requirements.

The process of naturalisation also depends on your own individual status, for instance:

We're experts in helping people all over the world

We can help with the naturalisation of EU nationals through qualifying residency in the UK. Our team in London stays at the forefront of British nationality and immigration laws and regulations to ensure your nationality goals are achieved.

How EU nationals can naturalise in the UK

As a European Union (EU) national (or the family member of an EU national), you can move to the UK to live and work. If you are a resident in the UK before Brexit (29 March 2019), then it should be possible to register and apply for pre-settled or settled status.

Given the recent Brexit vote and the likelihood that the UK will exit the European Union over the coming years, the status of those EU nationals living in the UK is unclear. It is important to secure your rights to live and work in the UK as soon as possible. 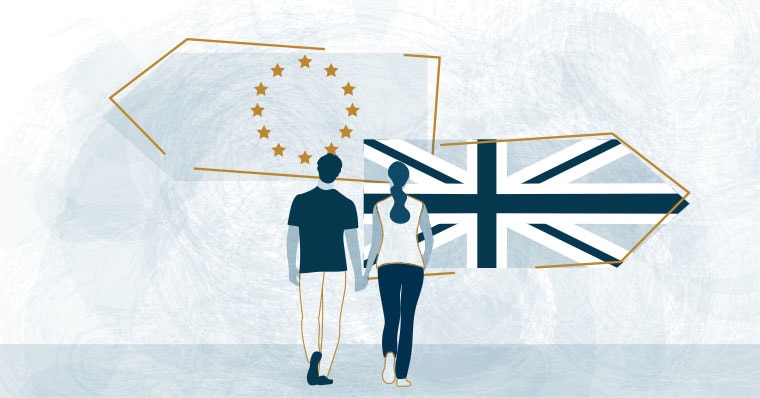 In order to naturalise in the UK as a British citizen, you will first need to qualify for indefinite leave to remain. There are numerous requirements that will change depending on your individual situation. If you have any questions about obtaining ILR and full citizenship, please do not hesitate to get in touch with us.

Using ILR to naturalise as a UK citizen

Indefinite leave to remain (ILR) is the status of permanent residency for non-EU nationals in the UK. It is possible for a person holding ILR to naturalise in the UK as a British citizen.

The requirements to be met are dependent on two factors:

In both cases, the following criteria apply:

*An applicant over the age of 65 is not subject to meeting these criteria.

Applicants who are married to a British citizen

There are specific requirements for naturalisation if you are married to a British citizen.

As a married partner, you can apply for naturalisation immediately after receiving ILR

Applicants not married to a British citizen

The requirements for naturalisation if you are not married to a British citizen are slightly different to those set out above.

Once your naturalisation application is approved, you will be invited to attend a British citizenship ceremony. This ceremony can only take place in your local council area in the UK. Once you have done this, you will be eligible to submit an application for a British passport.

The process of an Irish citizen becoming a British citizen through a period of qualifying residency in the UK is distinct from the process that applies to other EU nationals.

How it works for Irish citizens

Immigration law dating back to the 1970s and pre-dating the current European Union (EU) legislation means that Irish citizens are treated differently in the UK. Upon entry into the UK, you are considered settled for immigration and nationality purposes.

After a period of five years in the UK, and if you meet the other set criteria (including the good character requirement), you can apply for British citizenship.

Unlike other EU nationals, as an Irish citizen, you:

Given the recent Brexit vote and the likelihood that the UK will exit the EU over the coming years, the status of Irish citizens living in the UK is unclear.

Find out more about children under 18 attaining British citizenship.

While we think that Irish citizens will continue to have a special status in the UK, it is important to secure your rights to live and work in the UK sooner rather than later.

Includes (but is not limited to):

Any person affected by the above should seek professional advice before attempting an application.

Fill in the form below and we'll get back to you shortly.