Business expansion in the UK: Branch vs Subsidiary?

Are you an international company considering setting up a branch or subsidiary in the UK, but not sure which structure is best for your business? We explain the difference between the two and weigh up the pros and cons of each option to help you decide. 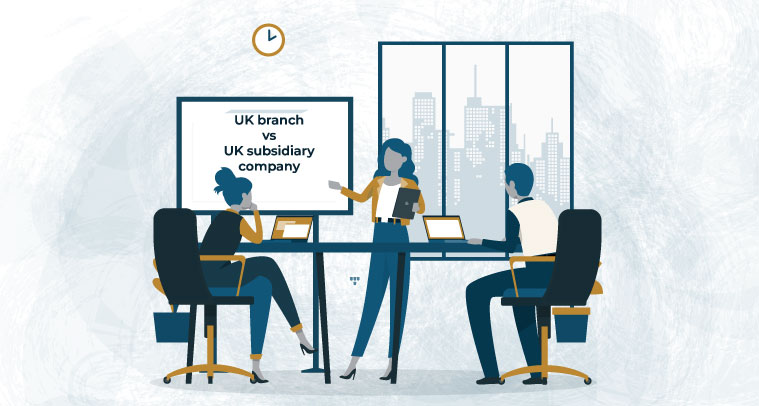 *This blog was first published in February 2016 and has been updated with new information for accuracy.

What is a branch?

Every expanding company will at some point grow beyond its headquarters. At this point, 'branches' of the business are usually established. When a non-UK company sets up a physical presence in the UK, it creates a UK branch, also known as a UK establishment. This way, a foreign company can do business in the UK without setting up a legal entity there.

In many cases, a branch performs the same functions as the head office and has no distinct legal personality from it. They are both components of one broader company. This means that all transactions are carried out in the parent company's name, which makes it liable for the branch's actions.

Setting up a UK branch

To open a UK branch, you must first register with Companies House, the registrar of companies in the UK. Any overseas company that establishes a UK branch must give that branch a name, which can be the original company name or another title under which it intends to trade in the UK.

Advantages of setting up a branch

The main reason for establishing a subsidiary instead of a branch is to maintain independence from the parent company. However, there are also advantages that speak in favour of establishing a branch, such as:

The parent company maintains a greater level of control

In a majority of cases, any revenue that is earned by a branch office is handled by tax treaties signed between the country of the parent organisation, and the UK (eliminating double taxation).

Any taxes that the branch office has to pay are handled by the parent company, which can take advantage of the taxation laws and benefits of the UK –

It's also worth noting that a branch can later be converted into a limited company if necessary, and it can also be closed without formal notice.

Disadvantages of setting up a branch

While a branch can be a less expensive and faster option, it also has some drawbacks. Consider these ahead of establishing a branch.

The parent company and its shareholders remain liable for the branch’s operations, including debts, fines, or legal settlements.

Branches usually run into difficulties when engaging in legal contracts, since UK companies are wary of entering into agreements governed by non-UK laws.

See also: Why the UK is still one of the best countries for business expansion

What is a subsidiary?

The formation of a foreign subsidiary is a common method of international expansion. They are typically formed because of a merger, acquisition or from the ground up in a new location.

A UK subsidiary is a legal entity incorporated in the UK under the local rules for the formation and registration of companies. A subsidiary is either wholly owned by the parent company or managed by a company in collaboration with local partners.

Setting up a UK subsidiary company

To create a subsidiary, you must first establish a new UK company. It's a good idea to get help from an advisor to make sure the company is incorporated as required and that the directors and shareholders are appointed correctly.

Advantages of setting up a subsidiary

A UK subsidiary has far more freedom than a branch. This means you won't have to reconcile your subsidiary's financial statements with those of the parent company, and you'll be able to form partnerships and diversify into new industries.

As a separate legal entity, a subsidiary provides greater legal protection to the parent company and shareholders because the liabilities of the limited company cannot be claimed against the parent company's assets.

A UK subsidiary is governed by UK company law. This makes it easier for a limited company in the UK to enter into legally binding agreements.

Disadvantages of setting up a subsidiary

There are some disadvantages to establishing this type of entity, but these are mostly administrative and can be dealt with relatively easily. Before starting the process, make sure you’re prepared for:

UK company law often has greater filing requirements and procedures for subsidiaries than that of branches, which means accumulative establishment costs.

Another cost consideration is that start-up trading losses can only be carried forward against future trading profits, not against the parent company's current year profits.

A business relocation specialist can handle your business setup and accounting administration.

An important note on tax

Tax law varies considerably from country to country. It is therefore essential for a company to take local advice on its home country’s tax position about foreign business and the above issues, while also considering the UK tax position.