A brief history of the British pound sterling (GBP) 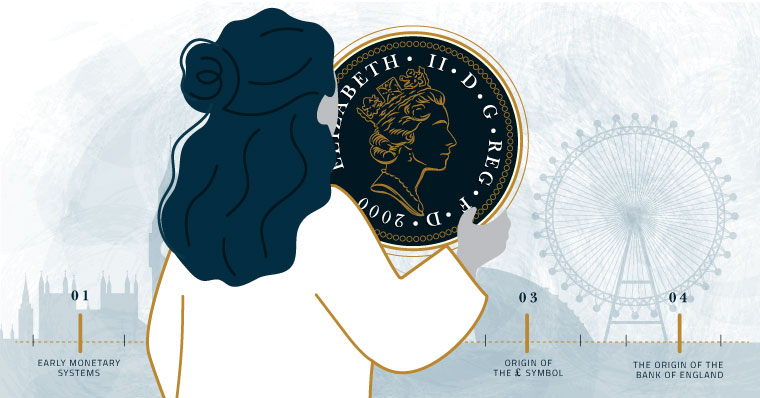 This has not always been the case, though. The currency had rather humble beginnings as a copy of the Merovingian (French) livre, to experiencing continued inflation and devaluation during the Middle Ages. It was not until the English kings employed regulation to unify and standardise the various pennies and coinage found in the country, that it stabilised and became important to the rest of Europe.

This article will look at the historical development of the Pound Sterling, its uses, and how it was influenced from a trader perspective.

Much of what we know about monetary systems during the Middle Ages (before the 1400s) is derived from archeological finds, such as the various coin hoard discoveries in the UK. These discoveries showed us what early coins consisted off, who minted them and gave us clues to their perceived value and uses.

The monetary system of Britain, as with almost all of its institutions during this time, was significantly impacted by the institution of ancient Rome. Coins were denominated in the same formats as Roman coins. The most developed of which could be found in the Carolingian kingdom (roughly corresponding to modern day France and Germany).

It should be noted, though, that money was not the only or even main form of exchange before the 700s. Following the collapse of the Roman Empire, political upheaval and constant wars caused widespread economic difficulties and greatly diminished confidence in the economy. It was therefore not feasible or desirable even to trade with or store money (heavy and valuable coins that could attract bandits and thieves). Bartering was therefore the main means of exchange and remained feasible well into the high Middle Ages. It is in this context that the Pound Sterling was developed.

Origin of the £ symbol

By the mid-700s, stable states had formed in most parts of Europe, and England consisted of various feuding kingdoms. The most powerful of which was Mercia, ruled by King Offa. It was his government that introduced Charlemagne’s monetary system into England. The English Pound was initially known as the Libra Pondo, which translates to pound weight in Latin (this is where the L abbreviation originated, now configured as the £ symbol). It was equivalent to the French livre, which had been derived from the ancient Roman system. The main difference was the terminology used.

Originally, penny coins consisted of pure silver and 240 of them would weigh one English pound. In practice however, 240 pennies rarely equaled one pound in weight due to various rounds of debasement (reduction of the silver content and weight).

The monetary system during this time could be classified as “bi-metallic” as the value of the currency depended on the metallic content of its coins. Coins could consist of either gold or silver (silver coins always less valuable than gold ones). Traders could, theoretically have taken advantage of the difference in metallic content of coins in various regions. This was possible due to the fact that coin production (or minting) was very much decentralised at the time. Coins were produced by private merchants who obtained a charter from the local government as well as by clergy.

Regulation and control were not sufficient to maintain the value of the currency. By the time Henry V came to the throne, we had a significantly weaker currency thanks mainly to the Great Bullion Famine. Bullion is a term for raw precious metals that haven’t yet been turned into coin. The bullion famine was caused by negative balance of trade between European and Asian merchants. Europeans were required to pay for spices and other import goods in silver or gold, while not having many goods to export to earn gold or silver in return. During this time, the older and heavier coins were melted down to produce lighter coins, thereby reducing the overall value. This “famine” lasted until the 1460s and caused such a scarcity of hard currency that much of the European economy reverted to barter trade.

It was not until colonialism was well underway in the late 16th century, with the extraction of gold and silver from mines in the Americas and Africa, that the European monetary system recovered.

We can help you identify, evaluate and mitigate the day-to-day currency risks your business faces

The origin of the Bank of England

The GBP received another boost when it became the official currency of the British Empire, as colonies were required to adopt it as legal tender. By this time, bi-mentalism made way for the gold standard which improved stability. The Pound was therefore fully backed by gold reserves held by the UK government at the time. Maintaining this standard became rather tricky as government debt soared (caused by various colonial wars).

To maintain the gold standard and to address the burgeoning debt, government instituted one of the earliest central banks, the Bank of England (BOE). During its early years, the bank’s main mandate was to manage the government’s cumulating debt with monetary policy as a secondary function. It was only after World War I that government realised the limitations of the gold standard. They could not address high inflation without monetary policy as the Pound was pegged to the value of gold.

Bretton Woods and the oil crisis

The BOE took the Pound off the gold standard in 1931 and adopted the Bretton Woods system. This system, amongst other things, required that the GBP be pegged to the USD at a fixed exchange rate. In practice, the GBP was allowed to fluctuate within a tight band (around 1% from the pegged rate). Traders would have been able to make a profit if the GBP moved outside of the peg, knowing that government will need to intervene.

This system came undone in the UK with the 1970s energy crisis and its subsequent economic fallout. As the oil crisis and subsequent recession hit the US economy, the USD started a significant. This, with the subsequent loss of the Dollar’s hegemony (caused by the recovery of Europe and the rise of Japan as global economic powerhouses) and the unfeasibly high interest rates in the US, caused the abandonment of this system.

The BOE engaged in quantitative easing throughout the early 1980s in order to lift the economy out of the recession post oil crisis. In the short to medium term, this caused inflation (initially from cost push, coming out of recession, but then later from demand pull, due to easy credit). In the long term, however, this easy access to credit promoted investments (especially from corporations), thereby boosting the economy by the end of the decade. Observers argue that the easy money from this era set the stage for high growth in the 1990s.

ERM was essentially a semi-peg, whereby each participating currency was allowed to trade within a tight band from a unit of account currency, namely the European Currency Unit (ECU). In most cases this was ±2.25% from parity with the ECU. In certain cases, this band can be as high as ±6%.

The problem arose when the UK economy started to significantly diverge from the economies of mainland Europe. This was most evident in increased trade with the US (its biggest trading partner). The weakening of the USD hurt UK exports which caused economic destress and becoming a rallying cry for a weaker GBP. However, the GBP was not allowed to devalue due to its semi-peg with the ECU and was already trading at the lower end of its price band. This led directly to the UK (and BOE) abandoning the ERM in favor of managing their own monetary policy in 1992.

As can be imagined, traders made significant profits betting on the breaking of the ECM semi-peg. No one more so than the legendary George Soros who took large short positions on the GBP.

Today, the GBP is subject to the BOE’s monetary policy and the overall economic vicissitudes of the UK.

At present, the GBP’s most important crosses are the USD (its biggest trading partner) and the EUR (similar economy) as well as the Japanese Yen (JPY). The BOE’s interest rate (key bank rate), the balance of trade and its GDP are traders most watched data points. Due to the dominance of the services sector, exports are not as important as interest rates and economic growth. Also due to the level of its development, these data points continue to be the biggest driver of GBP’s value.