Emigrating from South Africa? Here's how to reduce your tax payments

When planning a big move overseas, it’s easy to forget one of the most important things: tax. Here’s a non-exhaustive list of things you should consider before you leave South Africa that can reduce your tax bill. 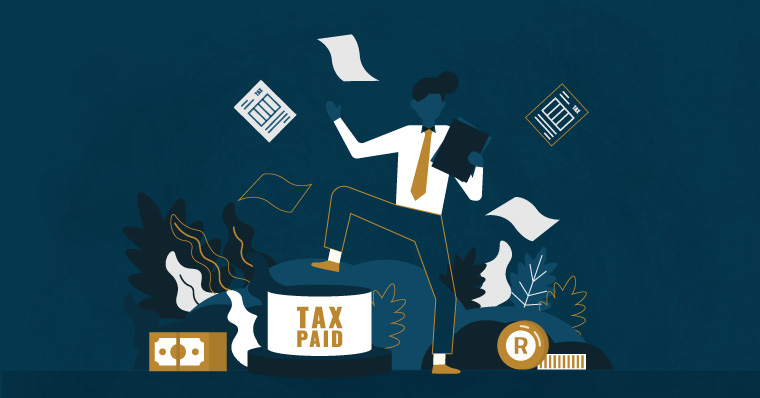 *This blog was first published in June 2021 and has been updated with new information for accuracy.

The first thing you need to be aware of if you’re planning to relocate is where you will be liable for tax and how much tax you’ll be expected to pay in South Africa and in your new home.

South Africa has a residency-based tax system, which means that you’re taxed on worldwide income if you’re considered to be a South African tax resident.

Unfortunately, tax residency tests are largely subjective and the above are only a handful of examples, so it’s important to get advice from a tax practitioner to determine your tax residency status before you leave.

Email us Give us a call

If you are tax resident in South Africa, you will always need to submit tax returns in South Africa. However, you may not need to pay South African tax. If you have spent more than 183 days outside of the country in the relevant 12-month period (at least 60 of those days being consecutive), then the first R1.25 million earned in foreign income is exempt from SA tax.

For this reason, we always advise clients to seek tax advice in both South Africa and the country they’re moving to, or to speak to a cross-border tax specialist who is familiar with both jurisdictions.

As of 2022, SARS issues non-residency tax status confirmation letters to persons who are permanently leaving the country. This letter confirms that SARS agrees that you are longer a tax resident of South Africa and provides an account of the date tax residency ended.

To apply for the Non-Resident Tax Status Confirmation Letter, you must have already completed the tax emigration process through SARS.

If SARS does not issue a letter upon request, it means that you have not changed your tax residency on their core system or that the change has been removed or denied. In this case you will need to submit a new application. This may result in additional costs.

Since SARS does not currently issue tax non-residency certificates automatically, it is important that you are proactive and take the necessary action.

Having a tax non-residency status, amongst other factors, means that:

When you emigrate from South Africa and leave the South African tax net, SARS sees you as selling your worldwide assets to your foreign self, and you become immediately liable for capital gains tax (CGT) on them. Essentially, SARS is claiming the tax that it would have received on those assets had you sold them while being a South African tax resident. This means that if you are emigrating from SA the timing will affect your tax payments. Immovable property in SA is excluded because SARS will still claim its share of tax when you eventually sell (more on that below).

Insider tip: The CGT that comes due when you leave is sometimes referred to as “exit tax” and you can significantly reduce it by leaving South Africa early in the tax year.

What many South Africans don’t realise is that the exit tax is due immediately when you leave, not at the end of the tax year when you file the return declaring your change of tax status. If you wait until your next tax return to pay, SARS is then entitled to charge penalties for late payment of those taxes.

Don’t let the exit tax come as a shock. Ask a South African tax practitioner to help you work out when and how much to pay so you can plan ahead and incorporate it into the cost of immigrating.

As mentioned above, you don’t have to pay exit tax on South African property, but you will have to pay CGT on it when you eventually sell it down the line.

Insider tip: there is a special allowance for South Africans who can show they were attempting to sell their primary residence when they left the country.

To make use of this allowance, it is essential that you do not rent out the property before you leave as it will then stop being your primary residence. However, once you have left you can rent it out as long as it is still on the market for sale.

Many South Africans leave the country without informing SARS. Unfortunately this can have a knock-on effect and lead to penalties or complications down the line. These are just a few of the problems delaying tax emigration can cause:

Insider tip: When transferring large amounts out of South Africa, it’s best to consult with a forex specialist as rules and restrictions might apply.

Finally, it’s important to get tax advice well in advance of leaving South Africa, as sometimes it’s possible to restructure your assets and investments before you emigrate to ensure maximum tax savings.

You may wish to speak to a cross-border wealth advisor, with knowledge of the ideal tax wrappers and allowances for your particular situation.


Our South African tax team works hand-in-hand with our wealth advisors and forex department to ensure you head into your new life with the best possible start. Don’t pay more tax than you need to when you emigrate. Speak to our team at taxsa@sableinternational.com or by calling +27 (0) 21 657 1517.