Living abroad has a significant impact on how much tax you pay and to which country that tax is to be paid. We take a look at why it’s important for South Africans who have left the country to obtain this letter from SARS to confirm their tax non-residency status. 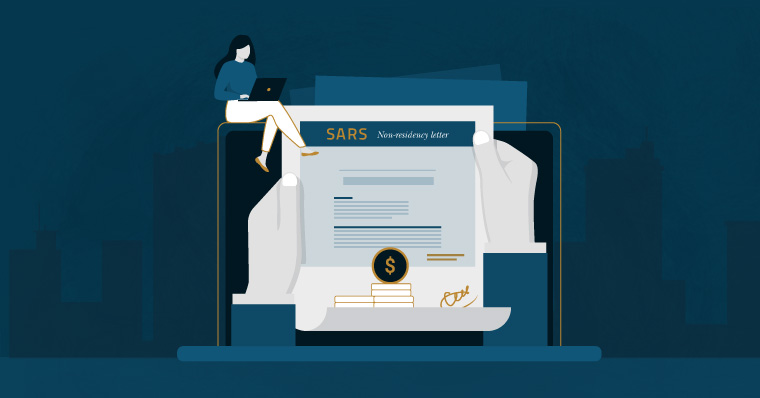 SARS non-residency tax status confirmation letters will now be issued to individuals who are permanently leaving the country. This letter confirms that an individual has ceased to be a tax resident of South Africa with an outline of the date tax residency was ceased.

SARS agreed to issue the letter of tax non-residency automatically when they were informed of the change. At this stage however, they are not doing so. To be able to apply for the SARS Non-Resident Tax Status Confirmation Letter an individual must have already completed the tax emigration process through SARS.

Your tax residency status determines how you are taxed in a particular country. Whether you reside in South Africa or abroad, you will be subject to an income tax. There are two concerns: where do you pay taxes and how do you avoid paying more than one tax on the same income.

If an individual resides in South Africa, they are regarded as a resident of the country for tax purposes. South African tax residents must pay SARS taxes on their income earned in South Africa along with foreign income, in instances where that income exceeds a certain amount.

Leaving South Africa does not automatically classify you as a non-tax resident. If you are a tax resident and living overseas you can be taxed on foreign income that exceeds a R1.25 million threshold. You may be affected by double taxation as well.

Tax residency is not the same as citizenship. You can remain a South African citizen, but since you no longer reside in the country, and because you do not have any significant connections to South Africa, you are not taxed in South Africa. Non-South African tax residents are only taxed on their South African-sourced income, for example, income from a rental property.

However, the process of becoming a non-tax resident in South Africa is not automatic. The only way to change your tax status is to formally undergo the relevant legal processes through SARS.

Tax returns are always to be filed in the country where you are not a tax resident first. It is possible that, in certain instances, a particular amount may be taxed twice since tax systems differ from country to country. Double taxation can however be alleviated through various Double Taxation Agreements (DTAs). By disclosing the tax which you will pay in the country that you are tax resident in, you can avoid double taxation.

It is important to get advice from a tax practitioner to determine your tax residency status before you leave South Africa. We recommend that clients moving abroad seek advice from a cross-border tax specialist who is familiar with both jurisdictions.

The benefits of tax non-residency are:

Tax residency definitions discussed above are for tax purposes only, not for anything to do with Home Affairs or exchange control.

Importance of having a SARS non-residency tax letter

If you are tax resident in South Africa, you are legally required to submit tax returns to SARS every year. You must declare your worldwide earnings, both local and foreign, and then claim any exemptions or tax credits on foreign earnings. If you do not formally note yourself as a tax non-resident, SARS will automatically classify you as a tax resident in South Africa.

To be able to apply for the SARS Non-Resident Tax Status Confirmation Letter you must have already completed the ceasing of tax residency process through SARS. Citizens are able to proactively approach SARS, with the relevant supporting documents, to prove non-resident status. Supporting documents required include (but not limited to):

Once this process has been completed, apply to SARS for the Notice of Non-Resident Tax status letter. If SARS does not issue the letter at the taxpayer's request, this indicates that the taxpayer has not changed their tax residency on their core system or that the change previously made has been deleted, requiring the taxpayer to reapply. This could result in additional costs for the taxpayer due to the inefficiency of SARS.

See also: How to access your SA living annuity offshore - an eFiling guide.

The non-residency tax letter is important for three reasons:

It is important to take the necessary steps, knowing that SARS no longer automatically issues the letter of tax non-residency. Know your tax status and act accordingly so that you are not negatively affected.

Speak to one of our expert advisers about your tax residency status.