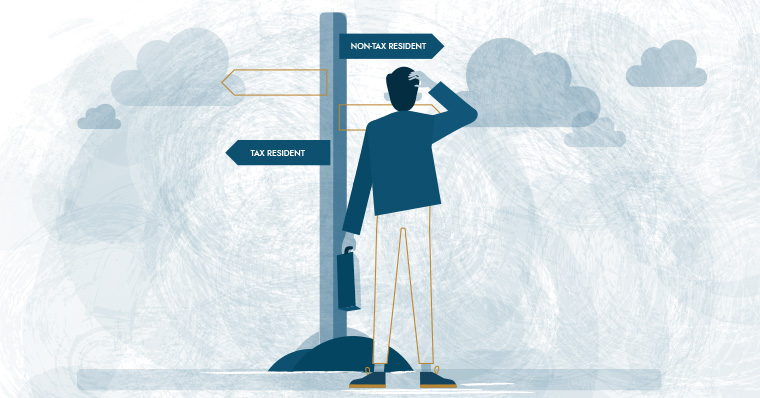 For example: If you earn rental income in South Africa but are a tax resident in the UK, you will submit your South African tax return first and pay this tax (should you owe any).

You will then disclose the paid South African tax on your UK tax return and HM Revenue & Customs will tax this amount and if the amount is higher than the tax paid in South Africa you will pay the extra tax. The reverse is also true when you are South African tax resident.

Who is a tax resident: The residency tests

You may be living in another country, but if you spend time in South Africa each year or have assets and family based in the country, you could still be treated as a South African tax resident. To ensure you remain compliant and don’t get a surprise tax bill, you should understand the tax residency rules.

To determine your tax residency status, there are two sets of criteria that you’ll need to check your circumstances against. The first is the ordinary residence test. If you don’t meet the criteria of this test, then you’ll move onto the physical presence test.

You can still be regarded as being resident in South Africa regardless of the number of years you’ve spent outside the country. This is because the South African Revenue Service (SARS) determines your residency by where your assets and family are based as well as the location of your permanent home, among other factors.

In some circumstances, dual residency is also a factor. If, for example, you’ve been working in Dubai for the past 10 years, you could find that you are a dual resident because you are a tax resident in both the UAE and in South Africa. In this situation, you would need to check if there’s a double taxation agreement (DTA) in place and where that agreement assigns your residency to.

This is a calculation of the actual amount of time you physically spend in South Africa. You are considered a South African tax resident if you meet all of the criteria below:

If you determine that you are a tax resident in both South African and the country you reside in, you’ll need to check if there’s a DTA in place between the two countries.

A DTA is also sometimes referred to as a double tax treaty. It’s an agreement between two or more countries that prevents your income from getting taxed twice – by the country in which your income is earned and your country of residence. Tax treaties help determine which country should receive the tax on your income.

To correctly apply treaty relief on your foreign earned income, you will need to consider various factors such as if you have a tax residency certificate, where you have a permanent home and where your centre of vital interests are among other factors.

What about the “expat tax”?

From 1 March 2020, only the first R1.25 million earned in foreign income by South African tax residents will be exempt from tax in South Africa. You need to have spent more than 183 days outside South Africa in any 12-month period and, during the 183-day period, 60 days are continuously spent outside South Africa. Such absence must be work-related. For example, if you spend 120 days working abroad and 65 days abroad on holiday, this will not meet the exemption.

What happens if you don’t comply with SARS?

A person who was born in South African or obtains citizenship by descent or naturalisation and may hold a South African passport. This is a Home Affairs definition.

Any person who has taken up permanent residence, is domiciled or registered in South Africa. This is a Home Affairs definition.

A person whose normal place of residence, domicile or registration is outside the Common Monetary Area (CMA).  This is a Home Affairs and South African Reserve Bank definition.

A resident who has left South Africa for any country outside the CMA with no intention of taking up permanent residence in another country. This is a South African Reserve Bank definition.

Your tax residency status determines how you are treated with regard to taxation in a particular country. An individual is regarded as a tax resident of South African if he or she is ordinarily resident in South Africa or meets the requirements of the physical presence test. This is a tax definition.

Still unsure about your tax residency status? We can determine your status or give advice regarding double taxation agreements. Get in touch with our tax consultants on +27 (0) 21 657 1517 or at taxsa@sableinternational.com.