Parents worry that relocating might negatively impact their children, but here are some ways that growing up abroad can give you an edge in an increasingly globalised world. 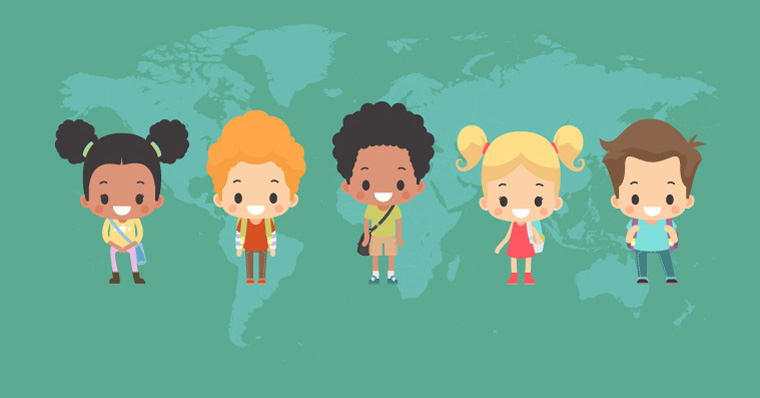 Relocating to a new country means your child will encounter new cultures, new languages, and new attitudes. These all have a positive impact on their development, as well as how they view the world and themselves in it.

Your child will become a third culture kid

Third culture kid (TCK) is a term associated with expatriate children. TCKs are children who have spent a significant period of their formative years living outside their parents’ culture. They lean towards a combination of their birth culture and their adopted culture: a third culture.

Kids living abroad develop skills that make them more adaptable than their peers back home. TCKs have been subject to significant changes during sensitive childhood years, which teaches them to be open-minded and flexible when confronted with change in the future.

Companies are moving away from single job descriptions and towards interchangeable job roles. ATCKs adapt to changing customer needs and technology trends faster than their fellow employees. This ability to evaluate what is happening around them and adjust their approach overnight has become a highly sought-after skill and a competitive advantage in the job market.

Much of the time, expat children are forced to make it up as they go along, always finding a way to bounce back after obstacles. Your child will build resilience early on – they won’t be fearful of taking risks that others wouldn’t. TCKs know that no matter the outcome, they can pick themselves up and continue moving forward.

Resilient employees are better able to cope with the everyday demands and pressures of work. ATCKs learn from experience and maintain a positive can-do attitude when managing change or setbacks. This toughness makes them more capable and dependable colleagues.

According to a study of 700 ATCKs, your child is four times more likely to achieve a bachelor’s degree, and roughly one third of TCKs go on to a master’s degree. One of the most important characteristics of an adult TCK is their high occupational success, which reflects their high educational achievement.

Education plays a key role in both finding a job and keeping a job and can open doors to higher-paying, more stimulating and rewarding careers. The more time spent in academia, the better your child’s writing, reading, comprehension and communication skills will become, all key in a competitive job market.

See also: Moving to Portugal – how to choose the right school for your children

Because they’ve been introduced to so many ways of doing things, a TCK’s world-view will never be narrow-minded. With an increased amount of hands-on experiences, TCKs understand that there is more than one way to look at every situation.

From childhood, TCKs can listen with openness and humility. They have learned the fundamental principle that different is not wrong, it’s just different. ATCKs can cross cultural bridges in a workplace environment, become invaluable mentors and influential leaders.

When both your parents are from different countries, and you live in neither, it becomes a matter of choosing which culture to identify with. Facing such important and complex life decisions so young and having the autonomy to not only do what they are told, but what they feel is right allows your child to mature quickly.

ATCKs have grown up feeling like they’re on “the outside” – they aren’t afraid to think independently of the majority. Having the courage to go against the flow and think logically will help you succeed in your career. Larry Page once said he invested a lot of energy in finding independent thinkers for Google because this “moon landing” thinking is what you need to achieve your goals.

Unsurprisingly, TCKs are good at learning languages. Since TCKs often grow up in countries where the primary language is different from their mother tongue, they are likely to speak at least two languages, if not more. This plays a key role in their future career choices and can give them countless opportunities as an adult.

The ability to communicate clearly no matter your audience is an asset to almost every profession. An understanding of multiple languages gives ATCKs access to new markets that may be out of reach to their competitors.

Research shows that children who grow up as expatriates have superior problem-solving abilities. Learning how to navigate new environments and social situations at an early age will give your child the tools to solve problems in every aspect of their life.

Problem-solving is a universal job skill, but despite everyone being tasked with some form of problem-solving in their career, not all employees are good at it. Being skilled at thinking on their feet and providing creative solutions to company problems means an ATCK will quickly be shortlisted for any job or promotion.

To be a good problem solver, you first need strong observational skills. By observing and assessing the world around them, your child will learn what to do and what not to do, rather than accepting things or issues at face value.

All sorts of jobs require good observational skills and attention to detail. By being more perceptive, ATCKs can properly pinpoint the core cause of any issue and quickly manage the outcome.

Multicultural children have a greater sense of compassion for the world. They understand the importance of changing behaviour depending on their cultural environment.

As a co-worker or someone in a leadership role, this interpersonal sensitivity allows ATCKs to build trust and connect with their colleagues and clients in an honest and meaningful way.

Growing up between worlds and cultures means your children will have friends from all walks of life. Your child will quickly develop an aversion to small-talk and learn how to establish meaningful friendships soon after arriving in their new home. Growing up abroad gives your child the opportunity to develop their international networking empire, one friendship at a time.

As international borders continue to blur, we constantly hear about companies becoming multinationals. The working world is full of cultural, linguistic, religious and ethnic diversity, and growing up with an international group of friends is one of the most direct ways to understand that.

See also: How to calculate your costs before you immigrate to the UK

Speak to our relocation experts if you want to relocate and give your child a world of opportunities. Contact our team at 1stcontact@sableinternational.com or give us a call on +44 (0) 20 7759 7536.