Read about Saskia’s love of London, her favourite books and how her parents’ business success influenced her own career path. 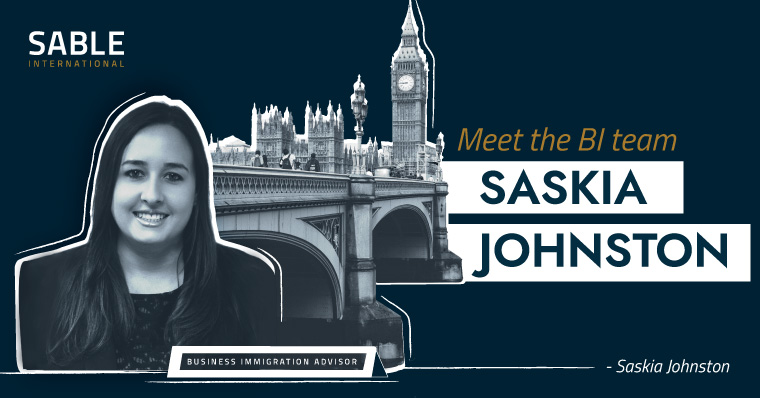 Where did you grow up and how did you end up in the UK?

I grew up in Cape Town, South Africa. I had a gap year in the UK after I graduated from university. I spent a year kind of living and working in London, doing all kinds of weird and wonderful jobs. I travelled a lot of Europe and fell in love with London. It's just the most incredible city. I love the cosmopolitan mix of people. But after a year, I had to go home because my visa was up – it was just a 12-month visa.

So, back to South Africa I went and I ended up joining the Sable International team. A few years into my career, in 2012, there was an opportunity for me in London, so I jumped at that opportunity. My husband and I got on a plane and came back to London.

Who do you feel has been the strongest influence in your life?

My parents, both of them for different reasons. My parents both had their own businesses in South Africa. My mom was what you would probably call a restaurateur. She would either start a restaurant from scratch or buy into a restaurant and kind of build it up and then sell it and move on. Very high stress, very long hours. Crazy amounts of work that go into that industry with such a tight profit margin. So, I learnt an exceptional amount about the hospitality industry and it's definitely the backbone of customer service in my life.

I think we both learnt a lot through my parents’ resilience in owning those businesses and dealing with staff and dealing with people and all the trials and tribulations that come with running your own business.

Then my dad, he took over the family business, which was an old-school mechanical engineering shop. They both ran very successful businesses, but they worked really hard within their businesses.

When I was quite young, I read a book that had a big influence on my life called “Rich Dad, Poor Dad”, which I think most people know. I found it fascinating how hard my parents were working to keep their businesses going in industries that were quite obviously not particularly scalable. It kind of moulded my ideology of what kind of career I wanted to go into. I didn't want to go into an industry where you were working so exceptionally hard for every Rand or Pound.

My sister and I both worked in both of the businesses at various points of our lives, throughout university and school. I think we both learnt a lot through my parents’ resilience in owning those businesses and dealing with staff and dealing with people and all the trials and tribulations that come with running your own business. They both did incredibly well in industries that are particularly hard to make a success of and now they are happily retired, which is even better to see.

How do you spend your free time?

Living in London, we are spoilt for choice. Travelling is one of our favourite things to do and I love the theatre. We have the West End on our doorstep. We love live shows and live music has always been one of my favourites. The last 15 months have obviously been a little bit different with Covid. It’s been way more about trying to enjoy the outdoors, the green spaces, the parks.

Which is your favourite park?

I’d probably say Hyde Park, because it's a massive and beautiful park. There are so many different elements in it. There's obviously the Princess Diana Memorial, there are restaurants, there’s the lake.

Working in the City of London, you learn quite quickly that if you’re only going one or two stops on the Tube, it's actually quicker to walk. So, when our offices were in central London, I’d often end up walking through parts of Hyde Park, which is always such a nice way to get to a meeting. You know, it really lifts the spirits and whether it's summer or winter, it's equally beautiful.

What is the best show you've seen on the West End?

You can never go wrong with any of the big names, but I think my favourite to date was probably “War Horse”. It was really exceptionally done with incredible puppetry, and so emotional. I don't think there was a dry eye in the house. So I think that was one of the ones that I will always remember.

Do you have a favourite book?

I love Dale Carnegie. His most popular book is “How to Win Friends and Influence People”, which I try to read every few years because I'll always take away different nuggets. But, actually, one of my favourite books is a different one of his, which is less well known. It’s called “How to Stop Worrying and Start Living”. I find it a fascinating recount of putting things into perspective and really compartmentalising different parts of life to avoid ever getting over stressed or overwhelmed, so you can deal with things in an efficient manner.

There're so many books on mental health and dealing with stress and how to best cope in a high pressure environment. I think he hits the nail on the head, even though it was written probably 40 or 50 years ago. It’s an amazing book, but most people don't know it. It’s one of the ones that I always have on my bookshelf. I still like paper books. I've got a Kindle, but a paper book for me is always plan A.

What do you feel is the most important value a person can have?

I'd probably say integrity. I think it’s always really important to have integrity when we engage with people and in the way that we treat people and that can filter through to many different facets and values, like honesty and transparency. I think you want to treat people the way they want to be treated as opposed to the way you want to be treated. If you do everything with a good intention, then you should be able to provide the right level of service and engagement that clients, colleagues, friends, etc. need.

How did you get started at Sable International?

In 2011 I had a master's degree in finance and economics and I was really looking for a foot in the door. I knew I wanted to be in professional services, but I didn't particularly know what that meant.

I ended up joining the Sable International team in the tax department, but it definitely wasn't for me. It was very repetitive work and I really wanted something that was a bit more engaging.

I did my thesis at the University of Cape Town on foreign currencies in emerging markets, so I had quite a deep understanding of the forex market and was really keen to get involved in that side of things. So, I moved over to the Forex department as a broker – buying and selling currency. It's very loud, it's very engaging, it's a fantastic kind of position and a great learning opportunity, but I was very keen for a role that was more client facing and many of our clients are in the UK.

The business had to become a licensed sponsor to be able to offer me the role, then go through the process of getting the certificate of sponsorship and the visa.

The business had grown intrinsically over the years, but now we needed to have more boots on the ground. I hadn't really done business development before, but was willing to be the guinea pig for the group and I moved to the UK office.

We had to go through the immigration process. That was my first engagement with visas and immigration, doing it in my personal capacity. The business had to become a licensed sponsor to be able to offer me the role, then go through the process of getting the certificate of sponsorship and the visa.

It quickly became obvious that networking and having sales on the ground in the UK was going to be very advantageous to the department. So, we expanded the team and quite quickly had a team of business development foreign exchange reps in the UK.

Then I got to the point that I was very keen for the next challenge and to start learning something new. That's when the business immigration opportunity came up. In the light of Brexit, it was going to be a completely different market, it was going to be the corporate market. I was obviously quite used to servicing the corporate market on the foreign exchange side, and I've gone through the process in my personal capacity, where I learnt the value in having a regulated firm doing your immigration applications, because it is an absolute minefield, I would hate nothing more than to have to go through the hundreds and hundreds of pages of paperwork to be able to submit those applications. Whereas, we have a fantastic consultancy service that can do that for us. So, it seemed like a smart move for the business and for me at the same time to get more involved in the business immigration side of things.

It’s been fascinating for me getting to know the business immigration side of the business, learning a lot about the kind of logistics of how the immigration world works.

It’s been a fantastic match. It works very well between the two businesses, because within the Sable International group, the Global Forex departments and the Business Immigration departments are two of the only business units that are servicing UK corporates.

It’s been fascinating for me getting to know the business immigration side of the business, learning a lot about the kind of logistics of how the immigration world works. Then of course, being able to refer to our trusty caseworkers who are actually processing applications for our clients.

What do you love about working in this space?

What I love about working in both spaces, whether it's foreign exchange or immigration, is it's just demystifying things for our clients, it's taking something that is exceptionally complicated, exceptionally misunderstood, and making it transparent and easy to understand for our clients.

I absolutely love people and working with different people across many different businesses and it's just an amazing feeling to be able to have a call with a client who was really confused about something, really overwhelmed, and to take the hassle away and make everything easier.

Saskia and the team are on hand to help you navigate all aspects of business immigration, from assisting with sponsor licences to ongoing immigration programme management. Get in touch at workpermits@sableinternational.com or call +44 (0) 20 7759 7584.