Must know facts about the UK

If you’re not sure where to start your UK research, have a look at some of the information below. This three-minute crash course will give you the essential information, figures and facts about the United Kingdom. 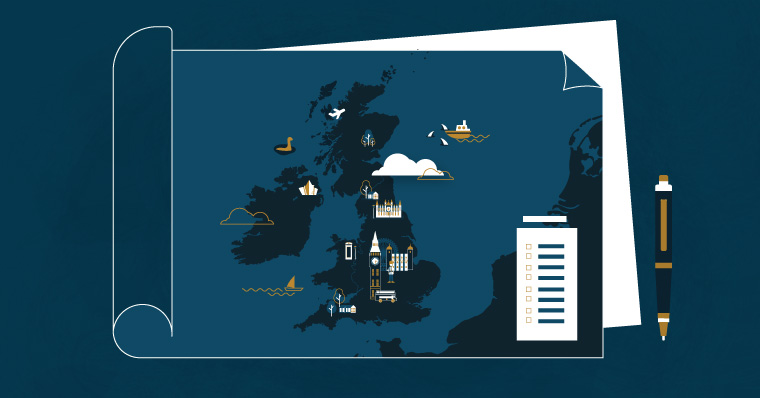 The UK is short for "The United Kingdom of Great Britain and Northern Ireland".

The phase was used to name the political union of these countries. The UK is a fully sovereign state in the same way as France or the US. But, and this is where it gets odd, the UK is made up of four countries: England, Scotland, Wales and Northern Ireland.

The four nations that make up the UK are also countries in their own right and have a certain extent of autonomy. People also see themselves separately and identify with the unique culture of each of the four nations. People will usually refer to themselves as either Welsh, Scottish, Irish or English depending on where they are from and might get offended if you call them “British”.

Do you want to live and work in the UK? Our UK relocation experts are here to help every step of the way.

The term "Great Britain" refers to a landmass, not a country. The term "Great" is used simply because it is the largest island in the British Isles, with the countries of England, Scotland and Wales within its shores. Although it has also been said that ‘Great’ was stuck on the front of ‘Britain’ (the Roman word Britannia) to differentiate Britain from its neighbour, Brittany, in Northern France.

Capital cities of the UK

As of 2020, the approximate population size of the whole of the UK is 67.8 million people.

The UK’s official language is English and English is the most commonly spoken language.

However, you will hear:

The UK is a constitutional monarchy and a representative democracy.

The monarch, currently Queen Elizabeth II, is recognized as the head of state. The sovereign of the UK also acts as head of state of fifteen other Commonwealth countries, putting the UK in a union with those states. The Crown has sovereignty over the Isle of Man and the Bailiwicks of Jersey and Guernsey.

The UK is a leading trading power and a financial centre. Agriculture is an important industry and highly efficient. Primary energy, like coal and oil, are major contributors to the economy, but services like banking and insurance are the greatest contributors.

Britain uses the Pound Sterling. The sign for the Great British Pound (GBP) is £.

Historically, the UK used the imperial system. The metric system is now more commonly used, with the exception of a few items. For example, distance and speed are measured in miles and miles per hour.

If you're moving to the UK to study, our relocation consultants can help make the transition as easy as possible for you. Call us on +44 (0) 20 7759 7536 or email us at 1stcontact@sableinternational.com.