2022 was unlike any other, full of unexpected surprises. Here is a recap of the events that had the greatest, and potentially longest-lasting, impact on markets and investors. 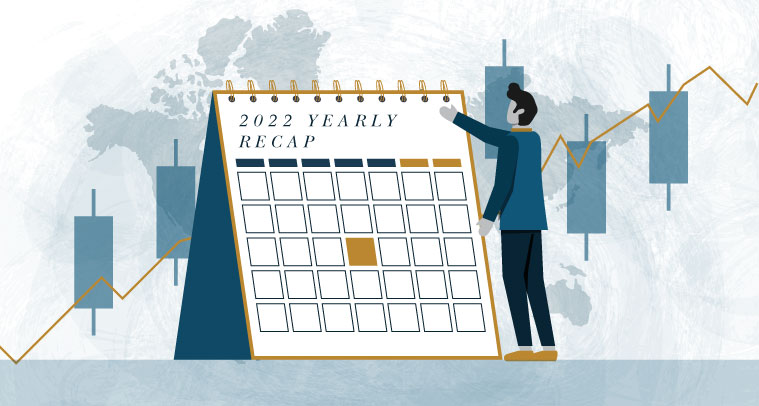 In 2022, the global forex market experienced the following events: 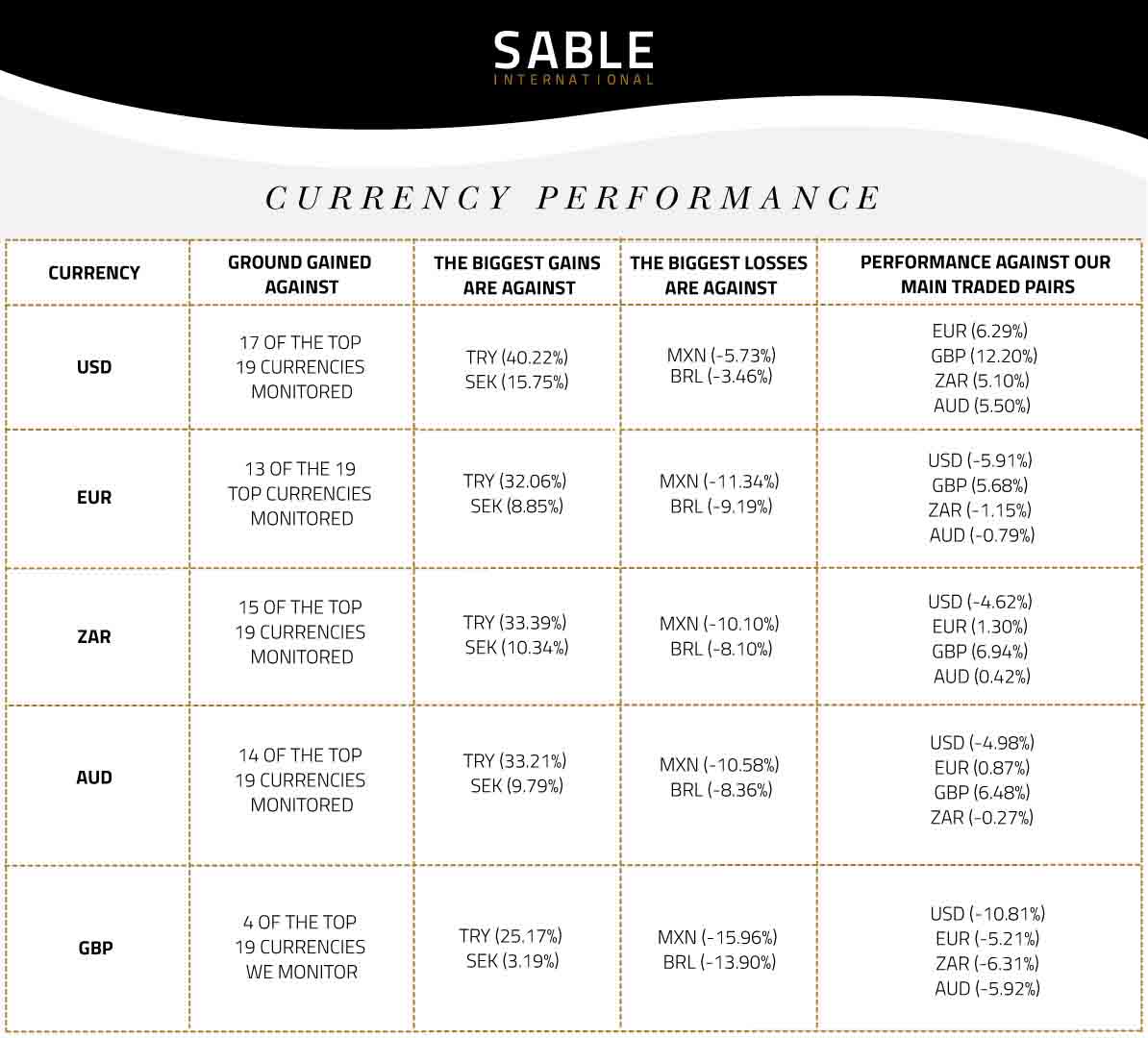 The US hit peak inflation and interest rates

As 2022 came to a close, the most significant events in the United States and around the world were out-of-control inflation and the various measures used by governments to combat it. Peaking at 9.1% in June, this inflation was caused by several factors, including:

All these inflationary factors required both monetary (central bank) and fiscal (government spending) policies to be implemented.

To achieve their objectives, central banks use monetary policy to manage the money supply.

Interest rates are often used as a means to influence the level of inflation. As inflation skyrocketed, the US Federal Reserve System (the Fed) raised interest rates from an extremely low level to a high of 4.25-4.50% at its December meeting. The rapid pace of rate hikes surprised the market and appeared to slow inflation by constraining consumer spending.

In addition to the Fed's actions, the government enacted the Inflation Reduction Act, which aimed to channel funds into the economy to alleviate pricing pressures on consumers. One of the applications was the release of the Strategic Petroleum Reserve (SPR), which has led to lower global oil prices.

Although the US is on the brink of recession, the Fed seems confident that the economy can withstand the rapid rate hikes and come through them relatively unscathed, or as they say: “stage a soft landing".

Numbers do not suggest that the labour market is cooling, but several tech companies have announced layoffs, which could signal the start of a more significant downward trend in employment. The market consensus is that the USD is overvalued and will weaken over the next 12 to 24 months.

Russia's invasion of Ukraine displaced millions and triggered a global energy crisis. This invasion put pressure on European energy market which in turn made electricity more expensive across the EU and led to a staggering rise in the cost of living.

When inflation reached its highest level in several decades, the European Central Bank (ECB) had no choice but to act and raise interest rates for the first time since the global financial crisis. Despite the war on its doorstep, the higher interest rates have kept the Euro afloat.

As the ongoing conflict weighs on the economies across Europe, Eurozone unity will be put to the test.

The market is expecting more rate hikes by the ECB, which could potentially push the EUR higher in the coming months, but again, it should be noted that the entire market does not know what will happen.

The UK: A change of monarchy, prime ministers and a skyrocketing interest rate

By all accounts, the UK has had a disappointing year. Brexit was not the resounding success that it was portrayed to be, and the loss of interconnectivity between the EU and the UK exacerbated the inflationary impact by creating various barriers to the free flow of goods and labour. The increased price pressures, combined with political turmoil, led to a significant loss of confidence in the UK.

During this political turmoil, market participants sold off the GBP, hurting the currency and putting it on the back foot as it tried to recover with the election of the current Prime Minister Sunak.

UK inflation hit a three-decade high, which has resulted in the Bank of England (BoE) raising rates from historically low levels. The pace of rate hikes has been slower than the other major central banks, putting additional pressure on the currency as the others appeared to be more appealing investments.

The BoE predicted a deep and extended recession in the UK, which dampened investor sentiment in the country and currency. We wait in anticipation to see if the political chaos in the UK calms down and if BoE 's prediction remains true.

Inflationary pressures are expected to ease, which should be good for the UK. However, with high energy prices still a major concern, there is a risk of further consumer unrest. Another factor to consider is the rising interest rate environment in the UK, where the BoE must keep the economy afloat while trying to contain inflation.

South Africa, like the rest of the world, has felt the effects of inflation, with higher energy costs affecting both consumers and corporations. The economic impact of loadshedding and the inability of Eskom, a state-owned energy company, to provide sufficient generation capacity to meet the country's needs has been significant. Despite this, the economy has shown remarkable resilience, with GDP growth expected to remain positive.

The South African Reserve Bank (SARB) has followed global trends and raised interest rates significantly to keep inflation under control and the currency moderately stable in the global sphere.

In addition to South Africa's economic turmoil, President Cyril Ramaphosa faced a possible impeachment threatening the status quo. The ruling ANC overruled this, not without internal conflict. The year concluded with the ANC National Executive Committee, where Cyril was re-elected with a larger margin than expected.

Eyes are tuned to see if:

The ZAR is expected to strengthen in 2023 as global market participants seek opportunities outside of developed economies. With the US surging over the last year, the ZAR has been undervalued, so some pullback is expected.

In an uncertain economy, having a forex broker who you can rely on provides you with peace of mind. Our forex department at Sable International is known for exceptional customer service and can help you plan your corporate or personal foreign exchange needs.

Australia emerged from harsh lockdowns and extreme Covid checks at its borders in 2022, giving the economy a boost during the year. Internally, the country was also in the midst of a political race. After public outrage over the length and severity of the previous government's Covid restrictions, new leadership was elected.

The Chinese government's Zero-COVID policy has stifled the Australian economy and led to drastic losses in trade.

Going forward, it remains to be seen whether the Australian economy will recover faster if the Chinese give in to domestic political pressure against the Zero-COVID policy. There are also many trade factors to consider due to strained relations in the Asian region.

Our Weekly Market Watch provides a detailed analysis and forecasts on major currencies from our forex brokers, who will monitor what the market has in store for us in 2023. Sable International is a fully regulated and registered financial services provider in South Africa and the UK. If you’d like to transfer money globally, we can help. We’re online and always available for a chat if you have any questions. Email forex@sableinternational.com or call +44 (0) 20 7759 7554