How currency exchange rates are determined

Currency exchange rates are one of the most volatile financial phenomena and are driven by a multitude of factors, ranging from political instability to economic data surprises. We break down the fundamental data points that can help you understand these fluctuations. 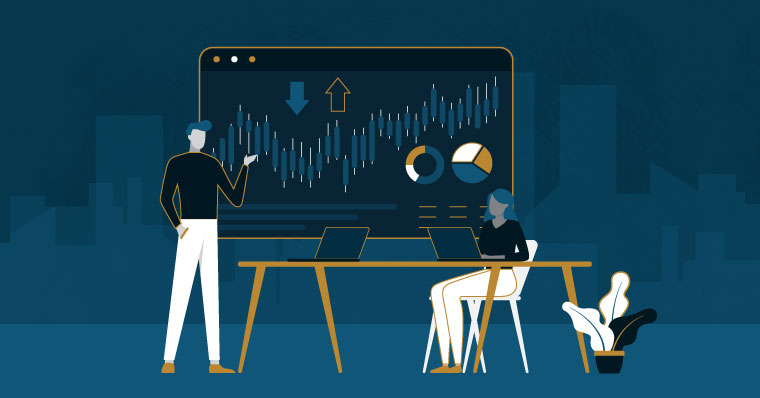 It is extremely difficult, if not impossible to predict where, or how exchange rates will move at any particular point in time. That being said, there are certain cues one can take from government and statistical data. These data points provide fundamental information that helps determine the medium-to-long-term value, or “strength”, of a particular currency. This can be compared to the more technical short-term information that mainly measures price/exchange rate movements at a particular point in time.

The fundamental data points can be classified into three main categories, depending on their sources and what they aim to measure:

It is important to note that these data points do not occur in isolation and are heavily influenced by one another. We therefore need take a holistic view of the data in order to make sense of it.

Perhaps the most important economic data point is the gross domestic product (GDP) of a country. This measures the total value of economic output of a country within a specific period of time (typically a financial year).

The unemployment figure (how many people are unemployed), along with the unemployment rate (percentage of working population without work), are the main indicators of a country’s employment prospects.

It should be noted that employment is a direct product of GDP growth (or economic growth) and education levels (employability). The main value of these two indicators is that one can derive a clearer picture the of long-term economic prospects of a country.

In addition to GDP and unemployment, non-farm-payrolls (NFP) measures the number of new workers on the payrolls of non-agricultural businesses. This is mostly relevant to developed economies (economies whose agriculture sector is a minimal contributor to GDP) and is very important to traders and investors in countries such as the US and UK.

The price of goods

Besides the above, the other main economic indicators are the balance of trade (the difference between exports and imports), inflation (the measure of price changes in time within an economy), and the consumer price index (CPI), which is a measure of prices changes for a basket of staple consumer goods and services.

CPI differs between countries and may not be comparable in all instances.

CPI differs between countries and may not be comparable in all instances. For example, the goods and services consumed (or considered as staples) in EU countries will be markedly different from those consumed in a developing country such as South Africa. Instead of comparing CPI between countries, you can look at it as a proxy measure for standard of living.

An improvement in employment and income growth usually leads to higher CPI and inflation. This then increases the money supply (at least in the short- to medium-term) and can push the value of a currency down relative to its trading partners. At this point, government usually steps in with their monetary policy tools.

Besides the economic conditions of a country, the other main price determinant of a currency is that country’s monetary policy. This essentially manages the supply and demand of the currency to control prices.

The most effective policy tools are central bank interest rates and government and corporate asset (mainly debt) purchases or sales, also known as “open market operations”. This directly affects the cost of debt and thereby indirectly impacts the overall money supply in the country.

Monetary policy spills over into the real economy (the economy minus the financial industry) by either reinforcing the original policy goals or changing those goals to match the current situation. A good example of this is when US inflation, caused by the “easy money” monetary policy in 2020, translated into very high inflation in 2021 and beyond. Tellingly, the US recorded 8.6% for April 2022 (40-year high). This is now forcing that country to not only reduce stimulus and market supporting measures, but also to aggressively hike their interest rates (the Federal Reserve hiked rates by 75 basis points for July, with prospects of further aggressive hikes at their next meeting).

In order to get an idea of how monetary policy impacts other economic phenomena, consider the Taylor rule, which is extensively used by the US Federal Reserve. According to the Taylor rule, mainly used in the USA but increasingly used by other country central banks such as the South African Reserve, the interest rate should be function of inflation (and an inflation target) and economic output as measured by GDP (and desired GDP). Almost all central banks either employ the Taylor rule or use variations thereof by targeting either inflation (such as South Africa’s 3-6% inflation target) or some other measure of price movements/volatility.

Forex is essentially a game of relativity. This means that developments in one currency will drive the relative value of a neighboring country’s currency in the short term.

It should be noted that forex is essentially a game of relativity. This means that developments in one currency will drive the relative value of a neighboring country’s currency in the short term. This may normalise over time as the monetary policy of the respective governments converge. A case in point is the EUR/USD currency pair. During the pandemic, both stimulated their economies with “easy money” monetary policies. This caused widespread inflation in both countries. However, their reaction to this inflation differed significantly. While the US aggressively hiked interest rates, the ECB took a more cautious approach. We therefore saw the USD gain significant ground against the EUR during the first few days after the rate hike. Their relative values have since normalised and are now converging due to their converging policy aims, to the point where some commentators are arguing for parity between the two.

Much of currency strength and movement is influenced by investor sentiment. This, in turn, is driven to a large extent by government rhetoric (what they say during press conferences and in the media). Some of the most watched events are central bank press conferences (especially following an interest rate decision) and the release of meeting minutes.

Government rhetoric usually points to the direction of future government policy and therefore can be classified as a leading indicator for policy trends. For example, the ECB rhetoric post-pandemic has mainly been of inflation as transitory. This justified the lack of rate hikes and continuation of their economic stimulus (at least in the short term). This changed significantly at the start of 2022 (due mainly to runaway inflation), translating into a later ending of most stimulus measures and high probability of rates hikes.

Meeting minutes from government organisations such as the Federal Open Market Committee (FOMC), on the other hand, are a useful gauge of what government focuses on and is concerned about. Meeting minutes usually summarise meeting discussions and can be useful in understanding how (and sometimes why) government arrived at their policy goals. Understanding the direction of policy allows markets to “price in” any potential government actions (or inactions in certain cases) before these actions occur. We sometimes do see large currency movements before and after an event such as a rate hike. Exchange rates then usually normalise thereafter.

One can argue that government actions are perhaps one of the most important factors determining investor sentiment.

One can argue that government actions are perhaps one of the most important factors determining investor sentiment. Consider the following example. On the evening of 10 December 2015, the South African government announced that President Jacob Zuma had fired the then Finance minister Nhanhla Nene. The finance minister, prior to his sacking, was considered a stabilising force in President Zuma’s cabinet (mainly due to the perceived ineptitude and corruption in the government). His influence can therefore be said to have been “priced in” to the value of the ZAR at the time. When he was removed from this position, the markets naturally over reacted. This caused the ZAR to plunge significantly against most major currencies. It took a few weeks for it to normalise. Note in this example there were no economic data or financial data released in the few hours prior to the sacking of the minister that justified the fall in the ZAR. Movement was mainly driven by sentiment.

Exchange rates are notoriously fickle and are subject to various movements and developments, most of which cannot be predicted beforehand. Stable currencies (also known as safe-haven currencies) come from those countries with the most predictable/stable politics. Movements and developments in their economies produce predictable government responses. This does not mean that volatility is low. As mentioned, forex is based on relativity. If a stable currency is paired with an unstable one, we will have short term volatility (sometimes excessively so), however long-term prospects will be stable.