Mishal Patel, Director of our Citizenship and Immigration division, discusses the progress of the proposed changes to UK nationality law and highlights some of the memorable citizenship claims he encountered during our recent South African roadshow event. 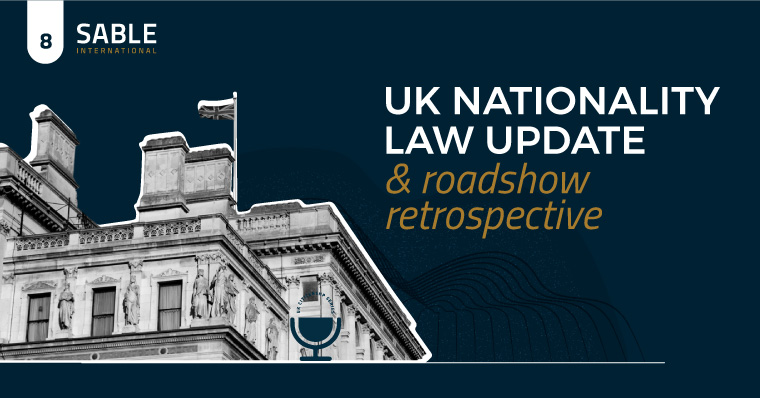 My name is Tallulah, and I'm here with Mishal Patel. Mishal was recently in South Africa offering free consultations in Cape Town, Joburg and along the Garden Route. We'll hear all about that in a minute.

Mishal, I believe there's an update regarding the nationality law changes that are currently working their way through Parliament. Can you remind us what those law changes entail?

Mishal Patel: Yes, hi, Tallulah. It’s good to be back on the podcast. The law changes in terms of British nationality entail making things equal going back 100 years. It's mainly to do with the earlier laws being gender discriminatory. So the current act that's been passed through Parliament, is looking to address that in the form of offering a new registration for adults who would be British, taking into account the gender discrimination in the earlier laws.

TV: So some examples would be if you would have inherited citizenship, but from a grandmother instead of a grandfather, or you were born out of wedlock. And certain things like that, right?

MP: Correct, exactly like that. The big one you touched on is the grandparent distinction.

TV: When do we expect them to pass? What's the current status?

I suspect we're looking at another two or three months' worth of back and forth.

MP: Whilst I was away, in South Africa, it cleared the House of Lords, which is the second house of parliament. It’s now at the consideration stage, which is the second last stage before it receives royal assent. At this stage, it will go back to the House of Commons, the first house, for them to debate and agree on the changes that have been made by the House of Lords. If they do not agree, both houses will keep on talking to each other until they reach a final agreement on what the bill should look like. I suspect we're looking at another two or three months' worth of back and forth.

TV: Okay, so that's a bit quicker than we expected.

TV: Moving on to your roadshow, how was the experience? Maybe you can tell us about a few of the cases you encountered?

MP: Reflecting back on the 14 days we spent visiting different places back-to-back, it was quite an experience meeting around 2000 people. It was quite rewarding and emotional. The instances that stick out are the recurring ones which were the crown service ones, surprisingly. This is where you have a claim through a grandfather who performs crown service. This was one of the top runners.

The other one was when someone would be British, but because it’s their grandmother that was born in the UK and not their grandfather, they currently can’t claim citizenship. We also came across what I call the triple descent, which is through a great grandparent, so, although rare, we did see a handful of them, which again, took me by surprise.

TV: Any particular stories that stick out to you?

British citizenship by triple descent (without knowing it)

MP: There was one triple descent one where we had two young lads walk in with their mum and it ended up being the case that they were British already and they didn't realise it.

I left feeling a little bit surprised, and I think it hadn't quite set in. Because I did hear back from them a couple of days ago, uncertain. They have signed up and this was one instance.

Unable to claim British citizenship by descent due to adoption

The second one was where a lady had walked in and mentioned that her dad was born in the UK. This took me aback because she should already have a British passport, but she was adopted by this gentleman. I think in British nationality law, unfortunately, there's always been a big distinction between biological children and adoptive children. Although there are ways in which you can register adoptive children, they disappear when the child turns 18.

A large part of what we are looking to do when the new bill becomes an Act of Parliament and commences, is to have a go at having someone like her be registered in the modern-day.

A large part of what we are looking to do when the new bill becomes an Act of Parliament and commences, is to have a go at having someone like her be registered in the modern-day. As a child, she couldn't make her own decision regarding whether she wanted a nationality or not at that point. It was a very emotional interaction as this was something she’d been trying to do for the best part of 25 years.

MP: Lastly, someone had been to the British consulates in Pretoria, a young person and had been fighting their case for a long time, because she happened to have a maternal grandmother born in the UK, not a grandfather, and was always turned away and so was her mom. Her mom passed away trying to help her.

I think that magical moment made our trip worthwhile.

She has a very strong claim and told her that maybe she’s gone about this the wrong way and that her claim can now be processed. It was a very emotional interaction. But I think that magical moment made our trip worthwhile.

How Sable International can help your British nationality claim

A reminder to everyone listening, you don't have to wait for Mishal to visit South Africa to speak to him. You can get in touch with him and his team by filling in our free online assessment. That's all for today, we will return to our series on crown roots for South Africans next with an episode specifically about crown service, which Mishal mentioned earlier, which is a surprisingly common route for South Africans. Thanks for your time Mishal.


Catch up on the previous podcast episodes in this series