If your parent or grandparent served the British government in "Crown Service", you might now be entitled to British citizenship. Mishal Patel, director of Sable International’s Citizenship and Immigration division, explains how. 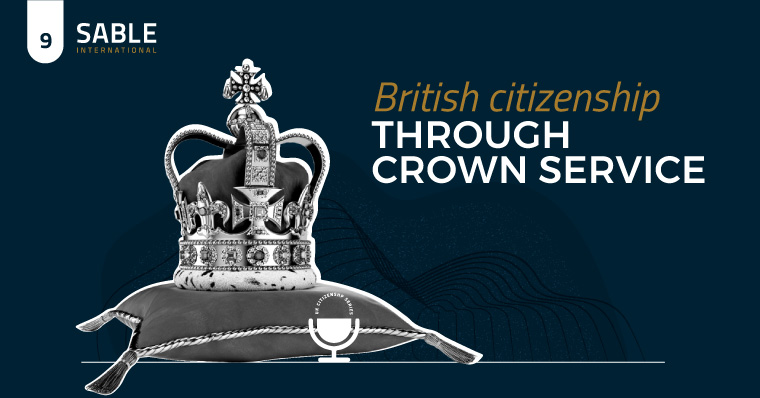 Tallulah van der Made: Hello and welcome to the Sable International UK citizenship podcast. My name is Tallulah, and I'm here with Mishal Patel. This is the second in our series on routes to British nationality for South Africans. Today, we'll be discussing one of the surprisingly common routes, Crown Service.

Mishal, I don't think the average person knows what Crown Service is. Maybe you can start by explaining it a little bit?

What is UK Crown Service?

Mishal Patel: Sure, Crown Service in regards to claiming British citizenship consists of two parts. First, you must work out which family member would have needed to be in service. If someone's claiming it and they're born before 1983, then the relevant person that must be in Crown Service is the parent.

It's more or less: Were they recruited in the UK? And was it on behalf of the UK Government, locally or overseas?

TV: So what counts as Crown Service?

MP: Unfortunately, it does make things complicated. The definition of Crown Service changed slightly on the first of January 1983. Let's talk about before 1983.

In that definition, Crown Service is any service that's rendered on behalf of the UK Government and the recruitment must have taken place in the UK. Its main focus isn’t concerned with where the service took place, or how long it was for. It's more or less: Were they recruited in the UK? And was it on behalf of the UK Government, locally or overseas?

TV: So this applies to people born before 1983, correct?

British nationality through Crown Service before 1983

TV: What would be an example of this?

MP: A good example would be someone working in Northern Rhodesia, now Zambia, in the ‘50s, having been sent over as a civil servant from the UK, and the next generation born there. We do see quite a bit of that with overseas civil servants. A lot of people often presume Crown Service is army service, but not always and not in the period before 1983. Working overseas was quite normal at that point as a civil servant. I must stress, for it to matter to the next generation, for example, a person was born in 1980 and their father was sent over from the UK as a civil servant to Northern Rhodesia – that service must cover the applicant's date of birth or his child's date of birth.

A lot of people often presume Crown Service is army service, but not always and not in the period before 1983.

TV: So they must’ve been in the Crown Service when you were born?

MP: Correct. In which case, that nationality would trump another generation born after in the UK. The person born in 1980 would have a claim through their dad, not necessarily a dad born in the UK, rather a dad who just happened to be recruited in the UK.

You could have a scenario where the paternal grandfather who was born in the UK did his part in South Africa and for whatever reason had a child born there. That child could have grown up in South Africa, come back to the UK for his schooling and was recruited from the UK and sent back out. That's an example of where a parent is in Crown Service. That usually is the relevant person when it comes to British nationality, for those born before 1983.

British nationality through Crown Service after 1983

MP: If you have someone born from the first of January 1983 onwards, out of the UK in, let's say, South Africa or Zimbabwe, the relevant person that must be in Crown Service is not the parent, it’s the grandparent. At the moment the law is quite gender-discriminatory, it says "grandfather", which is being addressed. It must be the relevant grandfather in Crown Service at the time the father or the mother was born if it’s the maternal father. That would allow the nationality to go to generations from the grandparent to the parent and the parent to the child.

If you have someone born from the first of January 1983 onwards, out of the UK in, let's say, South Africa or Zimbabwe, the relevant person that must be in Crown Service is not the parent, it’s the grandparent.

MP: That's absolutely correct. For those born after the first of January 1983, as I said earlier, it has to be a relevant grandparent in Crown Service, at the time the relevant parent was born. In the example I just mentioned, although the person was born in South Africa, her mom was born in Zimbabwe. Her father had been sent out as a teacher to teach in Southern Rhodesia. The person was born during his time he was a teacher there. This is in fact considered Crown Service.

MP: From the first of January 1983, the definition of Crown Service included what they called "designated service".

Designated service has nothing to do with the UK army or armed forces. It has to do with service performed in an independent country or a country where the UK is responsible for certain affairs. In this case, the UK was responsible for Rhodesia’s external affairs up until 1980. Any service performed by a civil servant from the UK, into Rhodesia at that time is counted as "designated service", which then falls under the overall definition of Crown Service.

MP: If anyone listening to this podcast thinks, "my grandfather wasn't in the army or the British, South African police or anything of that nature," then, that's fine. Crown Service, especially in Southern Rhodesia, ranges and can be a postmaster, agricultural officer or even a teacher. We have done and won those cases before.

Crown Service is a bit difficult because it's all about the evidence. You have to prove recruitment in the UK, which we can help people with. We know where to look for those things. We also have to prove the length of service covers, as you said earlier, the relevant parents and date of birth.

Catch up on the previous podcast episodes in this series